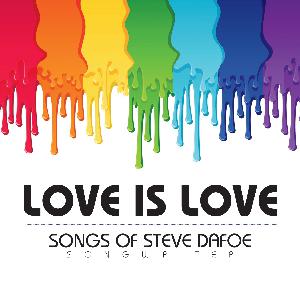 In 2019 Music licensed to the movie/documentary "Sinatra in Palm Springs: "The Place He Called Home". The Major Motion Picture "The Big Wedding" license music and stars Robert DeNiro and Robin Williams! E-One Entertainment's "The Demented" (Producer of "Nightmare On Elm Street") license "Brass" for this Horror film.

Other TV credits include "The Affair" on 'SHOWTIME', a "Golden Globe" winner for best TV Dramatic Show. Licensing extends to the "Witches Of East End" (Lifetime Channel) & the "Secret Lives of Women" at ABC TV.

The movie/documentary "Sinatra in Palm Springs: "The Place He Called Home" license Music!!!

The artwork says it all. Love who you love without anyone's judgement and do it with all your soul. The CD is a tribute to Matt, my son. He is fiercely proud of who he is and what his community stands for. The Love Songs are also inspired by Noreen, my rock and my love and whom is the center of my universe. My third inspiration is Melissa, my daughter, who can debate the Devil into visiting Heaven! She is equally fierce and compassionate about social issues, women's rights and the people she loves. All that matters in Life is 'to love and to be loved', so I hope you are as fortunate as me. Enjoy this music offering of pure love!